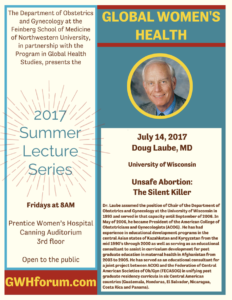 A 27 year old woman with an uncertain number of pregnancies (3 living children, ages 2, 4 and 5) was brought to the main women’s hospital in Yangon, Myanmar from a village approximately 50 miles north of the city by relatives. She was unresponsive, with a temperature of 39º Celsius. Physical exam was significant for generalized muscle fasciculations, hyperactive reflexes, and gross blood-tinged pus in her vagina. Her uterus was approximately 10 weeks in size and boggy. Breathing was shallow and labored. Pupils were reactive to light. She was taken to the medical intensive care unit and intubated, and IV fluids were begun.

Doug Laube, MD, MEd received his medical degree from the University of Iowa where he also completed his residency in obstetrics and gynecology in 1974. From 1974 to 1976, he served in the United States Navy Medical Corps at the Quantico Marine Corps Education and Development Command. He returned to Iowa and received a master’s of education degree in health science education from the University of Iowa in 1978 followed by 17 years as a faculty member, receiving numerous teaching awards.

He has assisted in developing clinical educational programs in the Central Asian states of Kazakhstan and Kyrgyzstan and served as an educational consultant for HHS to assist in curriculum development for resident education in Afghanistan from 2003 to 2005. He was an educational consultant for a joint project between ACOG and the Federation of Central American Societies of Ob/Gyn (FECASOG) in unifying post graduate residency curricula and exam development in six Central American countries from 2004-2007. He has chaired national reproductive health boards including Physicians for Reproductive Health (PRH, 2008-2011) and the Centering Health Care Institute (CHI, 2008-2015).

In 2010-2011, he was selected as a Jefferson Science Fellow under a jointly sponsored program by the U.S. Department of State and the National Academy of Science spending a year living in Washington, DC while working at the United States Agency for International Development (USAID) in Population and Reproductive Health and Maternal Child Health. Currently, he works with the Office of Global Womens Health at ACOG in developing programs in Asia and Africa while continuing his clinical teaching activities in the University of Wisconsin department of Obstetrics and Gynecology. He works at Planned Parenthood as an abortion provider and political advocate for reproductive rights.

Keywords for This Talk

Keywords for All Talks